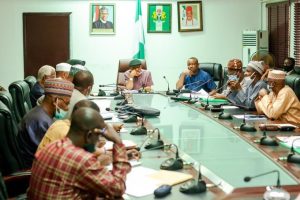 The Federal Government delegation led by Chris Ngige and the Academic Staff Union of Universities have resumed their negotiation over the ASUU strike embarked upon by the lecturers.

Naija News reports that the Minister of State, Labour and Employment, Festus Keyamo, announced the continuation of the meeting between the Federal Government and ASUU on Wednesday in a tweet on the micro-blogging site, Twitter.

“Our discussions/negotiations with the Academic Staff Union of Universities (ASUU) continues today,“ the Minister of Labour tweeted.

Our discussions/negotiations with the Academic Staff Union of Universities (ASUU) continues today…. pic.twitter.com/hpTRUiUxLL

However, the meeting between the Federal Government and ASUU ended in deadlock on on Wednesday for the second time in one week, as they failed to agree on the payment platform to be used in disbursing the salary arrears and the N30bn Earned Allowance of the university lecturers.

Naija News reports that the Federal Government before the meeting, had offered to pay the salary arrears and the N30bn Earned Allowances of the university lecturers through the Integrated Payroll and Personnel Information System (IPPIS) platform pending the roll-out of ASUU’s preferred platform, the University Transparency and Accountability Solution (UTAS).

However, the ASUU delegation led by Prof Biodun Ogunyemi, its National President, insisted that the payment by the Federal Government should be made through the UTAS.

Sequel to the Federal Government and ASUU’s failure to reach a consensus, the parties agreed to consult their respective principals and stakeholders and adjourned till next week Wednesday.

Meanwhile, among other things, the Federal Government had agreed to pay N40bn, being the pending Earned Academic Allowance of the university teachers overdue since November 2019. Out of the amount, N30bn would be paid on or before November 6, while the remaining N10bn would be spread equally over two tranches to be paid in May 2021 and February 2022.

ASUU and the Federal Government equally agreed to the planned release of N30b for the revitalisation of the education sector. The government offered to pay N20b as funding for the revitalisation of public universities by January 2021 as well as seek for sources of alternative and additional funding of the university system, among other conclusions.