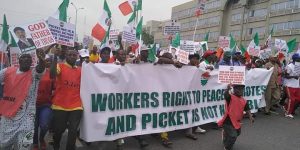 Labour leaders have announced plans to resume negotiations on the N30,000 minimum wage, which were suspended in some states in the wake of COVID-19 outbreak in March.

NaijaNews understands that workers in no fewer than eight states have not been paid the minimum wage nine months after the Nigeria Labour Congress, gave a deadline to state governments.

NaijaNews however learnt that due to the hike in fuel price and electricity tariff, workers were demanding fresh talks.

The Trade Union Congress said together with the  NLC it would stage street protests in states where implementation of the minimum wage had not started.

It noted that they have commenced the protests in Rivers and Ogun states, a few days ago.

He added that workers would storm Imo State soon for the minimum wage protests.

Although the new minimum wage bill was signed by the President, Major General Muhammadu Buhari (retd.),   into law on April 18, 2019,  both labour and the Federal Government did not agree on consequential adjustment of workers’ salaries until October 17, 2019.

In a communiqué issued after its meeting on December 11, 2019, the NLC gave state governments a  December 31 deadline to conclude negotiations on the minimum wage.

Due to the hike in fuel price, the talks on implementation of minimum wage in states, especially those that had not implemented it, has resumed.