In its determination and resolve to foster a new mindset among Nigerians, the Mindshift Advocacy for Development Initiative has unveiled a new blueprint to get Nigerians to think differently, believe differently and to act differently, so as to generate a mindset geared towards development. The event which was attended by dignitaries and the media held Thursday, October 17, 2019, at the prestigious Benue Hall of the International Conference Centre, Abuja.

In his address, Mr Joko Okupe, the Founder and Board of Trustee member of the Mindshift Advocacy for Development Initiative said that “the bane of Nigeria and by extension Africa’s problems is the mindset of Africans as individuals, communities and nations, about themselves and the mindset of the rest of the world about Africa. The wrong mindset of Nigerians and Africans in general which influences the way we do things, has created problems such as lack of visionary and purposeful leadership, bad governance standards, erosion and loss of good value systems, corruption, poor understanding of global issues and how it impacts their lives; unprecedented never-ending poverty, heavy debt burdens, over-dependence on international aids, endless conflicts, inadequate education etc.” According to him, the Initiative was incorporated on November 28, 2016, as a non-partisan, non-governmental organization aimed at re-directing citizens’ mindsets from negative mindsets in private lives, societies and nations to positive mindsets that foster meaningful holistic personal, social and national development. The initiative also seeks to activate a radical and positive change in the mindset of the Nigerian youth – and by extension, African youth.

According to Mr. Okupe, Mindshift Advocacy is actually focused on shifting mindsets from negative to positive. The movement is focused on redirecting the mindset of Nigerians from negative, unproductive and unprogressive mindsets to positive, productive and progressive mindsets. A destructive person has a destructive mindset and a destructive thinking pattern. There is so much capacity in the power of the mind that the way and manner that the mind is directed, determines the outcome of a man’s action. When you look at the great nations of the world, you will discover that their people have mindsets of greatness. The average Nigerian’s mindset is anti-progress and anti-development. How can we have progress and development when the majority of our citizens have the wrong mindset? We cannot achieve any meaningful transformation without a re-orientation of the citizens’ mindsets. Even when the Government decides to run a campaign on changing attitudes, the success will depend on whether the mindsets of the citizens have changed or not. We cannot but pay attention to how people think. We must have that clear understanding. That essentially is the crux of the Mindshift Advocacy.

He stressed that every effort geared at re-orientating the citizens with a view to making them develop positive and progressive mindsets as individuals, society and at national levels, would put us on the road to the meaningful and effective transformation of the continent for sustainable growth and development. This is why: “The changes we wish to make have more to do with how we think than what we actually do because thinking patterns ultimately influence actions. We need to get our citizens to embrace positive mindsets that can impact thought and action for our progress and development. We must also lead by example by thinking and acting differently.”
He cited Mr Paul Kagame, the President of Rwanda, who once said that Africa’s transformational change will first happen at the level of mindsets before it is translated into concrete actions. Okupe firmly believes that Africa’s journey of transformation starts with changing how people think. “It is vital for citizens of all ages and social classes to have the right mindset because they are the ones who would be actively involved in the day-to-day actions that bring about sustainable transformation.”

In order to achieve these, the initiative has in place well-articulated key focus areas toward its agenda. These areas are family and society, government and politics, education, business and economy, media, arts and entertainment, innovation and technology, religion, culture, and health and wellness. Additionally, it will approach this systematically through social research, targeted issues campaigns, action-oriented initiatives, knowledge sharing, events, and public discourse platforms.

Fielding questions to reporters at the launch event on what methods Mindshift Advocacy will deploy to achieve its goal, Joko responded, “It is all a matter of approach and method. Our initiatives would be determined by research and insight. There is a reason or rationale behind every mindset. How much have we researched into why we behave the way we do? Why do we think the way we do? We will make efforts to dig into the foundation to understand the issues and gain necessary insights before we develop initiatives. A man whose mind is conditioned to darkness tends to acclimatise to the situation and live in it. People’s eyes can only be opened through enlightenment which will serve as an illumination to the thick, engulfing darkness and ignorance around us. Adequate exposure to realities will compel them to see and think differently. If we continue at the current pace, we are definitely on a suicide mission as a nation, though we may be fully aware of this”.

Earlier in her welcome address Mrs Debo Onabowale, a core member of the Mindshift Advocacy for development Initiative said that “Mindshift Advocacy for Development Initiative is set to do a new thing in Nigeria by approaching the Nigerian problem from a different perspective. We believe that Nigerians, both leaders and followers, rich and poor, young and old need a different orientation to be able to chart a new direction and behaviour to propel peace and development.” 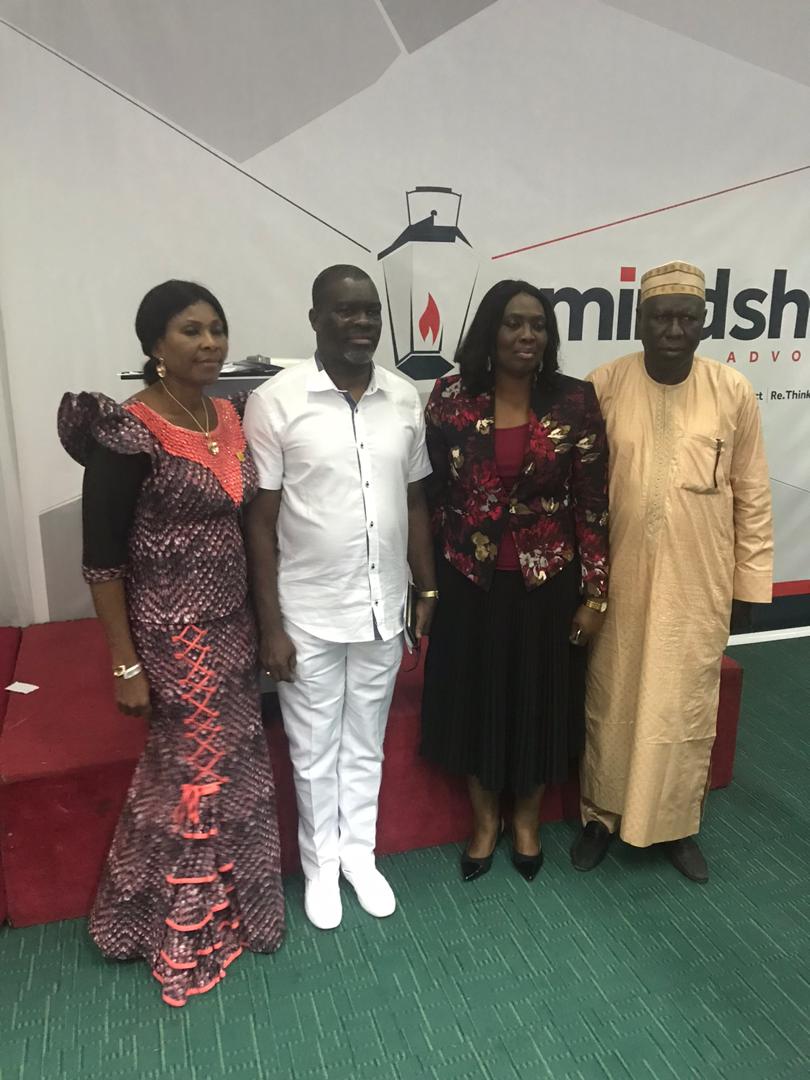