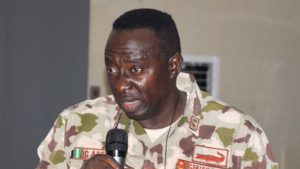 Olusegun Adeniyi, a former commander of the Operation Lafiya Dole has been found guilty by a military tribunal over a leaked video in which he complained of inadequate equipment to fight Boko Haram Terrorists.

The military court found him guilty on Monday of contravening social media guidelines related to military operations and personnel and therefore ruled that he be demoted by at least three years.

Similarly, his military aide, Tokunbo Obanla, who was tried alongside his boss, was also found guilty and sentenced to 28 days in jail with hard labour.

Obanla was prosecuted for posting the video recording on social media though he claimed it was done in error.

Naija News recalls Adeniyi, a Major-General who once led the soldiers in fighting Boko Haram terrorists became embattled in March this year after a video of him complaining about inadequate weapons for soldiers to fight the terrorists went viral on social media.

After the video leaked to the public, he was subsequently removed as commander of Operation Lafiya Dole and transferred to the Nigerian Army Resource Centre in Abuja with the military claiming Adeniyi’s redeployment is a pure routine exercise.

He was subsequently made to face a military court martial in July over the leaked social media video and was found guilty on Monday, 30th November 2020.

His lawyers have already disclosed they will appeal the military tribunal’s ruling before higher military authorities.