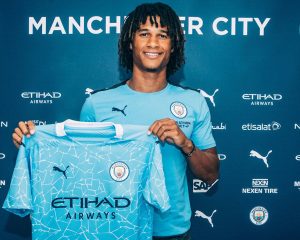 The move was confirmed on Wednesday by both the player and City, making him the second major player signed by the Premier League club in the current summer transfer window.

Naija News understands City paid a £40 million ($52 million) fee for the 25-year-old defender and the deal is worth 5 years.

The deal could rise to a potential £41 million.

“City have been the best side in England over the course of the last decade,” Ake is quoted to have said in a club statement after putting pen to paper.

“Coming here is a dream for me. This is a top side full of world-class players. Everywhere you look in this squad there are big names with international pedigree.”

Ake last played for Bournemouth before completing the move to City on Wednesday.

The player said he is very excited to join Manchester City and can’t wait to get started.

Very excited to join @mancity. Can’t wait to get started!