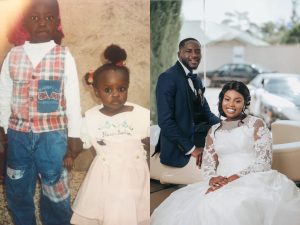 A Nigerian man has taken to the social media to shared his love story, how it all started with the woman he just wedded.

According to the newly wedded man whose name is revealed as Nanpon on Twitter, he was told when growing up that he had prophesied to a pregnant woman who happens to be their family friend that she will give birth to a baby girl who will eventually become his wife.

Nanpon revealed that though he was three years old then, he was unsure of the said prophecy but eventually the woman gave birth to a female child months after his alleged prophecy. According to him, though they grew up going to the same Church, they never attended the same school and nothing in regards to relationship clicked between them until 2016.

He disclosed further that the lady after many years, reached out to him via Facebook and he took the advantage to remind her of his childhood prophecy of her birth. After she had acknowledged the event, they became close friends, subsequently became lovers and now husband and wife.

You asked for the full story so here it is:@Heeldarh’s parents and mine had been friends since before either of us were born and they are till now. So when her mum was pregnant for her, she came to my house one day ( I was three years old at that time). I was told that I reached pic.twitter.com/wEt4TmtWyi

Meanwhile, Nollywood actress, Esther Nwachukwu has proposed to be the 8th wife of the billionaire Ned Nwoko, Naija News reports.