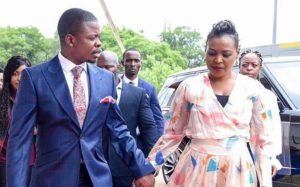 Malawian self-acclaimed prophet, Shepherd Bushiri and his wife, Mary Bushiri, have been arrested a few hours after an arrest warrant was issued on them.

Naija News understands that the duo had violated their bail condition in South Africa and escaped the country.

However, the Malawian police on Tuesday, November 17, launched a manhunt for the renowned prophet a few hours after his disappearance from South Africa with his wife.

James Kadadzera, the Malawian police spokesman who confirmed Bushiri’s arrest noted that the preacher and his wife surrendered to authorities after knowing the police are after them.

He said; “The prophet and his wife handed themselves over to the police … (in Lilongwe on) Wednesday, November 18, 2020 when they got wind of their impending arrest.”

On his part, Bushiri’s spokesperson, Ephraim Nyondo, denied the fact that the preacher and his wife’s arrest was sparked by the warrant issued by the Interpol. According to him, Bushiri had earlier vowed to present himself to the Malawi police to demonstrate “commitment that he is not a fugitive.”

“He is in Malawi to seek justice, which he believes he cannot be accorded in South Africa,” said Nyondo.

Meanwhile, Primate Elijah Ayodele of the INRI Evangelical Spiritual Church, on Tuesday called on Nigerians to pray against bloodshed, unrest and confusion in the country.