In recent days, social networking sites in Nigeria have reported that President Muhammadu Buhari will marry his Minister of Emergency and Disaster Management, Sadiya Umar Farouk.

The source of this news remains unknown however, it has been widely rumoured across the country and a hashtag  #BUSA2019 has been created for the Buhari and Sadiya wedding in 2019.

A letter of invitation to the wedding of the president and his minister has been released, indicating that the wedding will take place on Friday, October 11, in the mosque in the presidential villa. 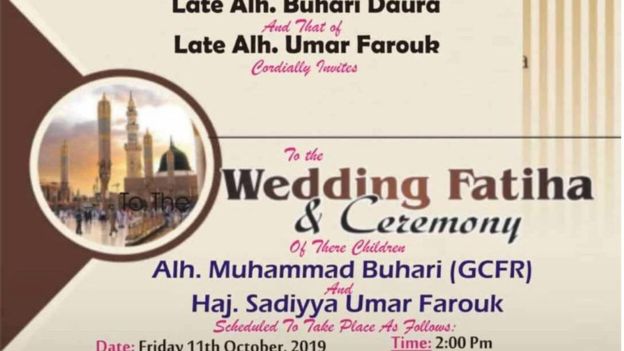 Photographs of Muhammadu Buhari and Sadiya Umar Farouk have also been circulated during various activities. And these images are used to illustrate the story.

A video of the minister and the president was also created and a love song was added to the video.

The groom is getting dressed for #TheWedding. He doesn’t want to miss kissing the bride #BUSA19 pic.twitter.com/KzStux1BWN

Also, photos and videos of Sadari Umar Farouk were circulated at a party where she was dancing and being treated with money. Social media users claimed that is the ‘celebration’ was with President Buhari.

A video also surfaced, where another alleged that Aisha Buhari, the wife of President Buhari was is fighting.

Video footage showing the woman standing wearing a long dress, and her face was not shown except her body.

In the video the woman is heard saying to another woman “Why would you close that door, what did I do to you? this is the presidency, we have over 200 soldiers and 200 policemen detaining us. That’s enough. I would like to know when you will leave here. That’s enough. ”

The woman who is being abused was heard saying, “I’m sorry, no one told us you would come back.”

VIDEO NEWS: Cabal locks up Aisha Buhari in her room in the Villa.
As the news of Buhari taking one of his ministers…

Many people believe the video was taken on Thursday night after the president’s wife arrived at the Aso Rock.

What is the truth of the matter

A source in the presidency said:

“The idea of ​​extending President Buhari’s marriage is not true. That’s not the case,”

But he said Aisha Buhari had for a long time been away from the country. In fact, she has spent four months in London.

The source said there had been a ‘long line of’ clashes between the president and his wife.

Based on a video showing a woman fighting in a house like Aso Rock, the source confirmed that it was Aisha Buhari.

The source said the video was old and had been taken for more than two years.

So far, the Presidency has said nothing on this matter, and the minister has not issued a statement to confirm or confirm the incident.

But Minister Sadiya Umar Farouk posted a series of photos and messages on her Twitter account Thursday showing that she is in Geneva to attend a meeting.

On October 17, join us as we #WalkOutPoverty. The International Day for the Eradication of Poverty is commemorated to encourage active participation by all to respect the rights & dignity of people living in poverty.#WalkOutPoverty#EndPoverty#Children @ossap_sdgs pic.twitter.com/PyQAnFS4Mk

This further show is that marriage is not true – since it would be impossible to marry her when she’s away from the country, and then the video that is said to be of her wedding is proven to be untrue.

Some of the videos were even taken as she was taking the oath of office when she was sworn in as a minister.

According to information gathered from various sources in the Presidency, there is no truth in the matter that President Muhammadu Buhari will remarry on Friday 11 October 2019.

This is in line with Aisha Buhari’s decision to spend several months abroad instead of staying with her husband at the Aso Rock Palace in Abuja.