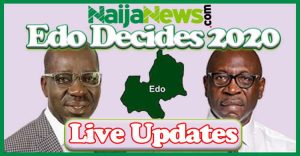 The 2020 Edo State Governorship Election (#EdoDecides2020) holds today, 19 September 2020 and Edo electorates will decide who occupies the Dennies Osadebay Government House for the next four years.

From Edo South to Edo Central right down to Edo North electorates would troop out today to elect the individual they can trust to pilot the affairs of the state until 2024.

Candidates and their agents will struggle to outsmart their opponents in Benin, Ekpoma, Ubiaja, Etsako East, Etsako West, Etsako Central Akoko-Edo, Owan amongst other places.

Though many candidates will be vying for the number one seat in the state, the race is majorly between the candidates of the All Progressives Congress (APC) Pastor Osagie Ize-Iyamu and the incumbent governor of the State, Godwin Nogheghase Obaseki of the Peoples Democratic Party (PDP).

Accusations and counter-accusation have trailed the build-up to the Edo election with many vested interests but the Independent National Electoral Commission (INEC) has insisted on conducting a free and fair election.

Many see the Edo State Governorship Election as a litmus test or a determinant on how the 2023 general election would look like.

Stick to Naija News by refreshing this page for the latest updates in the 2020 Edo State Governorship Election.