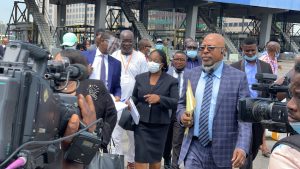 Members of the Lagos State judicial panel of inquiry on SARS abuses and Lekki toll gate shootings were on Friday denied access to the military hospital in Ikoyi.

The panel was on an inspection tour of some locations identified to be relevant to their task but were denied access to the military hospital upon arrival.

The panel is investigating cases of police brutality and the Lekki toll gate shooting of October 20, 2020.

Soldiers deny Judicial Panel of Inquiry and members of the press access to the Military Hospital in Ikoyi, Lagos. This is another stop on the Judicial Panel’s tour of sites crucial to their investigation. pic.twitter.com/fzNQbayZ56

Earlier on Friday, the panel had discovered some bullet shells during their inspection visit to the Lekki toll gate plaza itself.