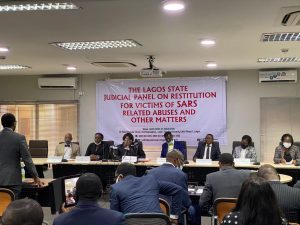 The Lagos State Judicial Panel of Inquiry probing the shooting of #EndSARS protesters at the Lekki tollgate by soldiers on the night of October 20 will continue sitting today, with three Brigadier Generals and one Lieutenant Colonel scheduled to testify.

Recall that the retired Justice Doris Okuwobi-led had suspended its sitting following the absence of a youth member of the panel, Oluwarinu Rachael Oduala.

Oduala and other youth member representatives boycotted the sitting in reaction to a request by the Central Bank of Nigeria (CBN) seeking to freeze accounts of 19 Nigerians and a public affairs company linked to the End SARS protests.

The CBN request was granted by a Federal High Court in Abuja, Nigeria’s capital. The request which was filed before the court on October 20 was granted by Justice Ahmed Mohammed.

The Investigative panel has fixed today, Saturday, for the Nigerian Army to return to give its testimony after they failed to testify last week.

Naija News reports that the Nigeria Army had last week filed papers at the panel ahead of their appearance before the panel.

The papers filed by the Army revealed that it was bringing before the judicial panel expended and unexpended blank ammunition, which was used to disperse the crowd by firing into the air on 20th day of October, 2020.

The army has also submitted 13 flash drives containing the recorded videos of the soldiers’ involvement in the incident.