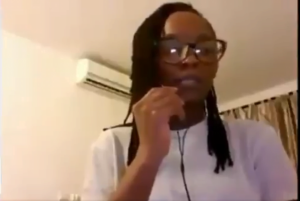 President Muhammadu Buhari-led government has been described by a Nigerian Disc Jokey, Obianuju Catherine Udeh, also known as DJ Switch, as dictatorship with a democratic face.

DJ Switch during an interview with Becky Anderson on CNN on Wednesday, said, “Nigeria is a dictatorship with a democratic face. I think that it is primarily to please the international community. It is our right to protest for the change that we demand.”

“This government has used force from the beginning. They started with infiltrating a peaceful protest with things but that did not work. Then they moved to bring the military in.”

She also called on Lagos State Governor, Babajide Sanwo-Olu, to say the truth about the shooting at Lekki toll gate.

“They know the truth and they have conflicting stories with each other. Nigerians have died and this is not a time to play games. Families are looking for their loved ones. The governor owes a responsibility to the citizens of Lagos State to say the truth,” she added.