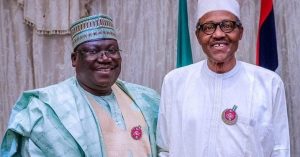 Senate President Ahmad Lawan has said the National Assembly will not fight President Muhammadu Buhari in order to please anybody in the country.

Recall that the Senate had on many occasions called on President Buhari to sack the service chiefs because of their failure to end security challenges confronting Nigeria, but the president has refused to take their advice.

Speaking while receiving a delegation from Adamawa State which paid him a visit in appreciation to the National Assembly for converting the Modibbo Adama University, Yola, into a conventional university, Lawan said: “When we disagree, we will do so, but if we have no reason to disagree, we will not do that because we want to please anybody.”

Speaking further, the Senate President commended the armed forces in restoring security to parts of Nigeria, adding that the spate of insecurity across states was gradually being reversed.

He noted that recent developments showed an improvement in efforts made by the armed forces towards addressing the spate of insecurity in parts of the country.

Meanwhile, the Federal Government on Tuesday said the Muhammadu Buhari-led administration will pay 24.3 million poor Nigerians N5,000 each for a period of six months.

This was made known by the Minister of Humanitarian Affairs, Disaster Management and Social Development, Sadiya Farouq.

She disclosed this while speaking at the inauguration of the Federal Government’s emergency intervention database for the urban poor.

A statement issued in Abuja by her aide, Nneka Anibeze, the Minister said the intervention would serve as cushion for those further impoverished by the COVID-19 pandemic.

Farouq said: “According to records, about 24.3 million poor and vulnerable individuals were identified at the end of 2020 and registered into the National Social Register.

“Each beneficiary will receive N5,000 for a period of six months.”