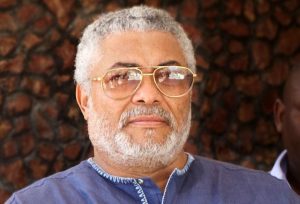 A video, reportedly the last that the former Ghanaian president, Jerry Rawlings, appeared in before his demise has surfaced on the internet.

Rawlings who led Ghana first as a military ruler and then as a democratically elected president died at the age of 73, at the Korle-Bu Teaching Hospital in Accra, capital of Ghana, Naija News understands.

He led a military junta until 1992, and then served two terms as the democratically elected President of Ghana.

A few hours after reports of his death, Rawlings appeared in a now-viral video laying on his hospital bed while a lady suspected to be his daughter cheer him up with fingerplays.