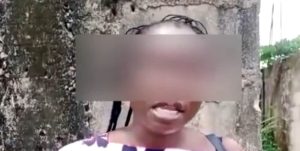 A hair stylist, Florence Abu  has narrated her ordeal in the hands of her pastor who lured her to Russia for prostitution.

According to her, she left the shores of Nigeria for Russia in 2012 and had thought that it would be for a good cause.

She had embarked on the journey abroad not just to better her lot but to improve the fortune of her family, but that was not the case.

Abu, an indigene of Edo state, realised when she arrived Russia that she has been sold into modern day slavery.

She had been trafficked out of Nigeria unsuspectingly.

Abu explained that when she got to Russia, she had engaged in menial jobs until her handlers told her that the real reason she was in the country was prostitution.

Abu said she was wooed to travel abroad by an assistant “pastor” in her church, who claimed to have seen her in a “vision”  prospering abroad.

According to a 2016 UNESCO report, poverty is the reason women and children are vulnerable to being trafficked. Another report by the Global Slavery Index ranked Nigeria 32 out of 167 countries where persons are trafficked from.

To assure that she wouldn’t run away when she arrives Russia, she was made to submit her public hair and finger nails to the Pastor’s mother.

“When he said that, I was like okay but I don’t have the money to leave, how am I going to leave, and he said that not the problem, and that they are the ones that are going to fix the bills to leave. The only thing they will request from me is for me to go and look for money to do my international passport, that if I can do my international passport, then the rest of the things they are doing is on them.

Abu lamented that she was forced into prostitution on getting to Russia, adding that some days she spent 24 hours with different clients.

She said when she complained  bitterly about the clients to her handler, she did not care but only requested the proceeds of her prostitution.

“I go out with men, at times for a week; sometimes, I have bad clients. Some carry guns, some chase me out of their house naked. In broad day light, I’ll run for my life without wearing anything,” she said.

“I even went out one day and they threw me from a three-storey building. I broke my hand, I was at home for two months and my madam said she would not be the one feeding me.”

Abu was repatriated back to Nigeria after she came down with a mysterious illness.

Having returned to the country in 2017 after spending five years in Russia, Abu has been working hard to re-establish her hair styling business and collaborating with different groups to create enlightenment against trafficking and illegal migration.