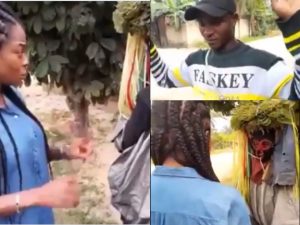 A Nigerian lady who identified herself as a member of the Christ Embassy Church has converted a masquerader back to Christianity.

Naija News understands that the lady came in contact with the masquerade while going about evangelising during the Christmas day celebration.

She began preaching to the masquerader who revealed his name as Ezekiel after he asked her for a Christmas gift. As seen in the viral video, the lady preached Christ Jesus to him and made him remove his masquerade costume.

After praying the sinner’s prayer and accepting Christ, the lady ordered some of her followers to give some money to Ezekiel, while she asked him to make it to their programme at the Christ Embassy Church in the community where the deliverance took place.

Watch the videos below as shared online.

Meanwhile, the leader of INRI Evangelical Spiritual Church, Primate Elijah Ayodele, on Sunday, noted that the truth about President Muhammadu Buhari‘s government will soon be disclosed.

Naija News reports that the cleric stated that Buhari is not in charge of his government. He added that the cabals are the ones ruling the country.