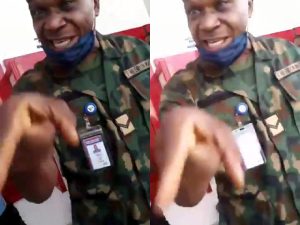 A lady identified as Ada Oma on Twitter has accused a soldier with the Nigerian Army of assaulting her during an incident at an ATM stand on Monday.

According to the lady who shared her experience on the micro-blogging site, the incident which happened at Oshodi in Lagos State has left her severely traumatized.

Explaining what transpired, the lady with username, @vels20 narrated that she was on the queue waiting her turn to use the ATM when the soldier asked her to move so he could pass.

She responded by asking if he was on the queue but later moved to give him passage. She continued asking him the question which reportedly angered the officer.

In the altercation that followed, as seen in the video she posted, the officer removed his belt and beat her while others tried to pacify the two of them. She added that she didn’t say or do anything provocative.

In her words on Twitter, she wrote: “Hello Nigerians, I was just assaulted by an army official this morning 26/10/2020 at the ATM stand of @UBAGroup at their Oshodi branch.

I’m still shaking and crying as I write this because I have never felt this way in my entire life. I’m also scared writing this because he threatened me. So my Life is your hands Nigerians.

@UBAGroup, this happened at your branch in Oshodi and your security men were there. He hit me!!!!!
I literally cried my way to the office. I never insulted him. I only asked if he was on the queue and he got angry and furious and violent.

He threatened to make me bleed blood, in my own country because I asked if he was on the queue. I want justice.”

Watch the videos of the incident as shared by the woman on Twitter:

Meanwhile, it will be recalled that the #EndSARS protest which commenced in the country about two weeks ago started as a call on the government to bring an end to all forms of brutality and excesses by the Nigerian Police and other security operatives.