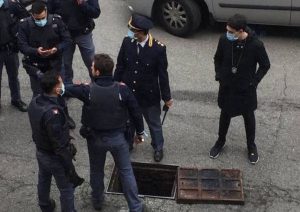 A group of armed criminals on Tuesday robbed a bank and escaped via the sewer system in the northern Italian city of Milan.

The thieves armed with dangerous weapons including guns robbed a branch of French Bank Credit Agricole in Piazza Ascoli, a semi-central area, at around the opening time of 8.30 a.m. (0730 GMT).

Naija News reports that the Italian police has begun a citywide hunt for the group of criminals.

“They came in through the sewer system, they asked to open the vault and stole from safety deposit boxes,” the branch director told journalists at the scene.

“We don’t know how many boxes they stole from, when they were done, they left through the sewer system, just as they came in.”

The director, who did not want his name mentioned, said there was a brief scuffle, but no one was hurt.

He added that he alongside two other employees were inside the bank, and one managed to escape after hearing him shout that there was a robbery.

The ANSA news agency quoted police sources as saying that at least six people took part in the heist, and that the robbers entered the bank via a hole made from a neighbouring building.

Police arrived at the scene and closed off the area expecting to negotiate with the robbers, but they disappeared before any contact could be established, ANSA said.