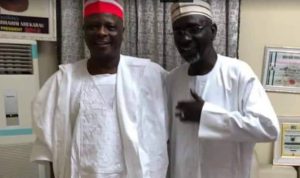 The former Kano State Governor during interactive media session disclosed that there is no misunderstanding between him and other leaders.

Shekarau while speaking on his relationship with Ganduje said, “When I was the Permanent Secretary, Cabinet Office then, he was a commissioner, and we used to interact a lot. No problem”.

He further stated that his political differences with Kwankwaso will not affect their relationship.

“When I was in APC, Kwankwaso joined. I did not leave because of him, but the leadership. The same thing when I was in PDP; I later left, not because he joined the party”, the Senator explained.

Naija News had earlier reported that Shekarau on Sunday, said the All Progressives Congress, should allow justice to prevail in choosing the presidential candidate of the party.

The former Governor of Kano State while speaking with journalists questioned why Nigerians can not decide who rules over them through their voting.