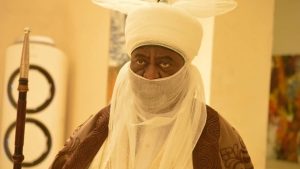 Emir of Kano, Alhaji Aminu Ado Bayero, has been made the permanent chairman of the Bayero Emirate Council.

Naija News understands that the approval was made known on Tuesday, September 8 by the Kano State House of Assembly in its new Emirate Council Amendment Bill, 2020.

Naija News recalls that Kano State government, under the leadership of Governor Abdullahi Ganduje in 2019 with the approval of the state assembly created four new emirate councils in the state, a development which was not appreciated by the deposed emir, Alhaji Muhammadu Sanusi II, and as well as some prominent persons in the state.

The new emirates which are Gaya, Karaye, Rano and Bichi, which joined the Kano Emirate Council brought the number of first-class emirs in Kano state to five, records have it.

On Tuesday, the State House of Assembly, presided by the speaker, Abdulazeez Gafasa, adopted the amendment during its plenary, Naija News understands.

Speaking during the plenary, the Majority Leader of the House, Kabiru Dashi, said the amendment made provisions for the Emir of Kano to serve as the Chairman of the Council of Chiefs, thus, bringing the issue of rotation to an end.

According to him, “in the new law, the number of kingmakers had also increased from four to five members to allow for the free and fair election of a new emir whenever there was a vacancy.”

“We have four kingmakers in each of the emirate councils; in the case of death or removal, we are trying to avoid a situation where two will support and two will reject,” Dashi noted.

“By increasing the number to five, it must be free and fair, while electing an emir. And also, the new law will provide a three-day deadline for the election of a new emir.”

Meanwhile, on Tuesday, September 8, the Senate Chief Whip, Orji Uzor Kalu, noted that he can bring back the leader of the Indigenous People of Biafra, Nnamdi Kanu to Nigeria and convince him to drop the agitation for Biafra.