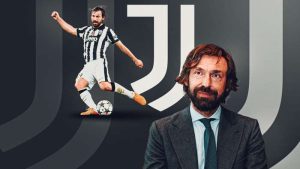 41-year-old Pirlo will replace Maurizio Sarri who was sacked after just one season as Juventus crashed out of the Champions League in the last 16 to French club Lyon on Friday.

Pirlo has signed a two-year contract.

| Andrea Pirlo is the new coach of the First Team.https://t.co/riVxl1enbJ#CoachPirlo pic.twitter.com/pf9QRbJ6Ll

The 41-year-old, who made 164 appearances for the club between 2011 and 2015, was only named as Juventus Under-23s manager 10 days ago but gets an immediate promotion.

A club statement read: “The club has decided to entrust him with the technical leadership of the first team, after having already selected him for Juventus Under-23.

“Today’s choice is based on the belief that Pirlo has what it takes to lead, from his debut on the bench, an expert and talented squad to pursue new successes.”

Naija News had earlier reported that Sarri, who delivered another Serie A title, was sacked following the club’s last-16 exit in the Champions League, going out on away goals to Lyon.