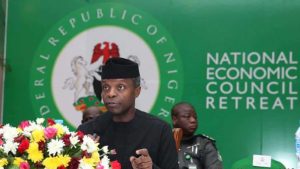 Naija News gathered that the meeting, which was held at the Presidential Villa Conference Hall, will discuss issues affecting the states, like the Budget Support Fund.

The Federal government had provided the Budget Support Fund to 35 states, excluding Lagos, in 2016 to help them augment financing their budgets.

But, state governors are now asking the federal government to review the deductibles from their monthly allocations.

In attendance at the meeting include the newly sworn-in Governor of Imo State, Hope Uzodinma and Governor Rotimi Akeredolu, who led the opening prayer after the arrival of Osinbajo.