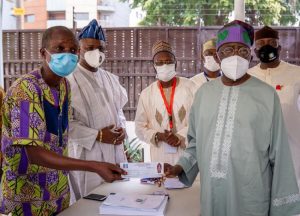 The National Leader of the All Progressives Congress (APC), Asiwaju Bola Ahmed Tinubu, on Saturday, revalidated his membership of the party in Ikoyi, Lagos.

Naija News reports that the APC has not renewed its membership register since the initial registration exercise of 2014 despite the surge in its membership.

Recall that the Chairman of the APC caretaker committee, Mai Mala Buni, has warned leaders of the party to desist from hijacking the party’s membership registration and revalidation exercise.

Buni gave the warning during the inauguration of the membership and revalidation committee headed by Niger State Governor Abubakar Sani Bello at the party’s national secretariat in Abuja.

The Yobe State Governor said the party would not tolerate any form of sabotage of the process, adding that it would punish any leader found guilty.

He said that the party had adequate backup materials to ensure a successful exercise, saying that no one would be disenfranchised.

The governor charged the committee to work as a team and contribute their quota to the success of the exercise.

“I am very sure that our figures in the register would surge by quadruples or even more, to further prove that APC is indeed Nigeria’s largest and leading political party,” he said.

#NewsFlash: National leader of the All Progressives Congress @OfficialAPCNg, Asiwaju Bola Ahmed Tinubu revalidates his membership of the party in Ikoyi, Lagos.@OlaAwakanTVC pic.twitter.com/xny36xW44g