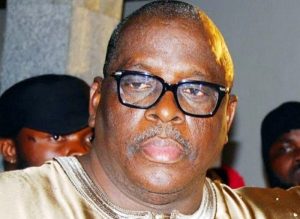 The remains of the late former senator, Buruju Kashamu, was on Sunday buried at his Ijebu Igbo home.

Naija News reports that the Governor of Ogun State, Dapo Abiodun, was at the Ijebu-Igbo home of the late Kashamu.

The entire town wore a mournful look as sympathisers who cut across religious beliefs and political party affiliations were all on the ground to bid the late politician goodbye.