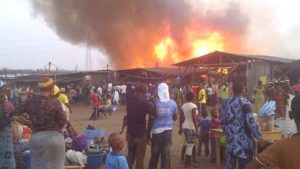 The Maola shopping Mall in the Ebute Ero Market at Idumota, Lagos State, was on Friday gutted by fire.

Naija News reports that the cause of the fire, which affected shops 35 and 36 in the shopping mall, remains unknown.

According to the LASEMA Boss, the fire was stopped and responders have returned to base.

“Upon the arrival of the emergency responders at the scene, it was revealed that a building, the Maola Shopping Mall, was affected by fire of an unknown origin,” he said.

“A combined team of the LASEMA responders from Lagos Central Zone, the Lagos State Fire (Sari Iganmu), Federal Fire Service and the Nigeria Police Force was able to curtail the flames and only the top floor of the building (shop 36 and 35) was affected with no casualties.

“Responders have returned to base.”