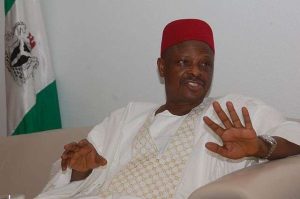 Former Kano State governor and leader of Kwankwasiyya movement, Rabiu Musa Kwankwaso, has reacted to the victory of Governor Abdullahi Ganduje at the Supreme Court.

Naija News recalls that the Supreme Court had ruled that Ganduje was duly elected governor of Kano State.

Delivering judgment on Monday, the seven-man panel of Justices of the Supreme Court upheld Ganduje’s election and dismissed the appeal by the candidate of the Peoples Democratic Party (PDP) Abba Yusuf.

The apex court by its ruling in a unanimous decision by the panel on Monday laid to rest all matters surrounding the 2019 governorship election in Kano State.

Following the Apex Court ruling, Ganduje, while receiving a former chairman of the PDP, Rabiu Sulaiman Bichi, to the All Progressives Congress (APC), described Kwankwaso as selfish.

Also speaking, Bichi said nothing good happened to him and other loyalists of Kwankwaso despite following him for 20 years.

He also claimed to have met with President Muhammadu Buhari before defecting to the APC.

Reacting in an interview on a radio programme in Kano State, Kwankwaso said the Kano State governor and his allies would regret their comments and actions in 2023.

“They will definitely regret at the end of their tenure, they will be saying ‘had we known, we would have handed over to the winner in 2019,” he said.

According to the former minister of defence, Ganduje’s contradictory comments over the years had placed the Kwankwasiyya movement in a good position ahead of future elections and political battles.

Speaking on plans to join the APC to contest the 2023 presidency, Kwankwaso said: “In politics, it is not a surprising thing to see us in the same party someday, but the truth is, I am contented and living in peace.

“We haven’t done anything wrong to them and if we did, I know they would have said it since. What they are presently saying is so laughable to the public and it makes the public an avenue to give them derogatory names, which is so sad.”

On Supreme Court judgement that affirmed Ganduje as the duly elected governor of Kano State, Kwankwaso described it as a blessing.

The PDP chieftain stated that Kwankwasiyya had won more supporters who knew what actually happened during the 2019 governorship election.