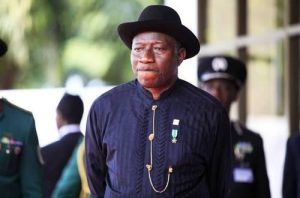 Former President Goodluck Ebele Jonathan has stated that it was too early to begin the talk about returning to the presidency in 2023.

Speculations have emerged that Jonathan, who was defeated by Muhammadu Buhari in 2015, maybe plotting a return to Aso Rock.

Recall that some governors of the All Progressives Congress (APC) and chieftains of the party had recently visited Jonathan, as pressure continues to mount on him to contest the 2023 election.

Asked if he would be joining the presidential race for 2023 after attending an event organized by the Commonwealth Community Choir, Jonathan said, “It is too early to talk about that.”

Meanwhile, the former Bayelsa governor has stated that the unity of Nigeria is questionable.

Speaking during an exclusive command performance by the Port-Harcourt Male Ensemble International tagged ‘Peace for All Nations’ at the Ministry of Foreign Affairs, Jonathan said Nigerian youths engaged in all kinds of confrontation that are not good for the nation’s unity.

“If you go to the Southwest and to the North, the Arewa Youth Group, they feel they are superior to the national youth body.