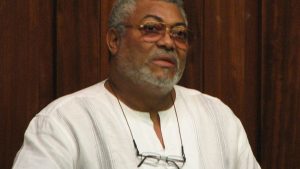 In the hit of mournings of former President of Ghana, Jerry John Rawlings, a young lady has arrived from the Volta Region of the country with claims that she was sent to resurrect the dead leader.

According to Emefa who appeared a few hours after Rawlings was announced dead, the former leader was just in a deep sleep and not dead.

Naija News understands that the lady stormed the residence of the late military and political leader, with claims that she was sent by the late President, Atta Mills‘ ghost to bring the ‘sleeping’ leader back to life.

Emefa demanded that she should be allowed to perform some rituals to bring Rawlings back to life else, he will join his ancestors. She insisted Jerry John Rawlings is not dead, that he is just asleep.

However, it was reported that Emefa was refused access to enter the late president’s residence and never allowed to perform some rituals as instructed by Attah Mills.

Watch the moment the lady arrived at Rawlings’ residence in the vide below;