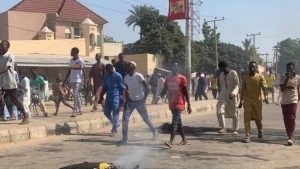 Investigation has begun into the jailbreak which occurred in Benin and Oko prisons in Edo state yesterday.

The Nigerian Correctional Service (NCS) made this known in the early hours of today.

Recall that suspected hoodlums allegedly broke into the prisons yesterday during the #EndSARS protest in the state yesterday, and many prisoners were freed.

Reacting in a statement, Austin Njoku, spokesperson of the service, said efforts were ongoing to determine the exact number of prisoners who escaped, adding that the figure of casualties has also not been confirmed.

“Custodial centres were attacked this morning by suspected protesters under the #EndSARS protests in Benin and Oko in Benin,” he said.

“Efforts are underway to arrest the situation and return normalcy back to the centres. The armed squad personnel of the service are working tirelessly to bring the situation under control.”

He also condemned the attackers for “their non-peaceful, and violent destructive actions”.