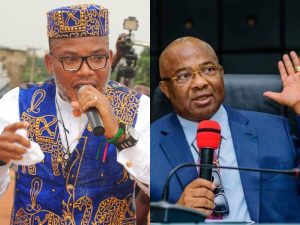 The leader of the Indigenous People of Biafra (IPOB), Nnamdi Kanu, has accused Governor Hope Uzodinma of Imo State of opening the state’s border for Fulani herdsmen to troop in just for political gain.

The IPOB leader alleged that the governor is systematically working out his way for the position of Vice President in 2023.

Kanu made the submission while lamenting over Fulani settlements in Imo and Abia States, Naija News understands. He insisted that governor Uzodinma was working out to establish “Fulani game plan” in the state so as to secure the position of a Vice President in coming election.

According to him in a recent statement he personally signed, IPOB is the last line of defence against Fulani conquest of the Southeast.

“This had always been a Fulani game plan. When they said it in 2018, we thought it was a joke but today it has become a nightmarish reality for our people in Benue State,” Kanu’s statement reads.

It added, “Hope Uzodinma, the Fulani Supreme Court Governor of Imo State is working very hard to turn Imo State into another Benue State in return for an empty promise of Vice President in 2023.

“Abia State Governor, Chief Okezie Ikpazu now boasts of the two largest illegal Fulani settlements outside Arewa core north. We IPOB are the last line of defense between them and total Fulani conquest. We are not like Hausa peasants that betrayed their future generations by allowing themselves to be overrun by Fulani vandals.”

Meanwhile, a Nigerian development economist and Presidential candidate in the 2019 general election under the African Democratic Congress, ADC, Obadiah Mailafia has stated that Nigeria will never return to shape until the Northerners bow down to ask the Ndigbos forgiveness.