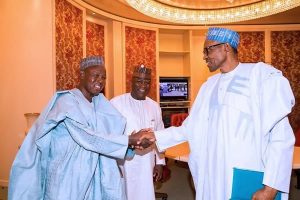 President Muhammadu Buhari on Wednesday met with the Katsina State governor, Aminu Bello Masari at the statehouse in Abuja.

The two leaders met to discuss issues of insecurity affecting the state and the North-West region.

The governor at the meeting, briefed the President on the current situation of security in Katsina State and discussed new strategies that will be put in place to defeat the bandits terrorizing the state.

Briefing state house correspondents after the meeting, Governor Masari maintained that the situation remains under control but the security forces will not relent until the situation totally returns to normal.

He added that the raining season has also made it difficult for heavy military equipment to be deployed against the insurgents in the area due to the soft soil.

However, he observed that the raining season has become a snag in the war against the bandits as soft soil prevents the quick deployment of heavy military machinery.

Meanwhile, it will be recalled that the National Security Adviser, Major General Babagana Monguno (retd), On Tuesday, noted that President Muhammadu Buhari is not pleased with the insecurity issues in the country.

According to him, due to the dissatisfaction of the President, he is planning an overhaul of the nation’s security architecture.

Monguno revealed this while speaking with State House Correspondents on the outcome of the meeting of the National Security Council presided over by the President.