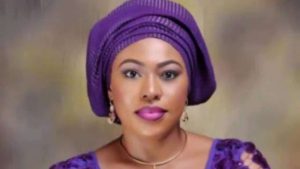 The candidate of the All Progressives Congress in Okigwe North Federal Constituency rerun election, Miriam Onuoha, has been issued Certificate of Return by the Independent National Electoral Commission.

Onuoha was presented the certificate by INEC National Commissioner, Prof. Okechukwu Ibeanu at the commission’s headquarters in Abuja.

Onuoha while speaking on the presentation dedicated her victory to the people of her constituency and God Almighty, who made it possible.

She, however, condemned the death of her supporter who was killed after she was declared the winner in the election which was described as free and fair.

“This election was a test run and it became a testament to the fact that when there is a will to execute a properly planned election, it is possible.”

“It is a bitter taste that after this wholesome and landslide victory, one of my strongest supporters was killed. What is topmost on my mind right now is the feeling of pain that I cannot explain”.

She called on VIPs with armed security personnel to be mindful of the actions of their security details to make sure that they function according to the rules.

Onuoha further stated, “there should be no indiscriminate or sporadic shooting, even in places of gathering, there are laid down strategies to control the crowd.”

“You have tear gas, pepper spray, stun gun. I think the use of a gun is like the last resort. So that the lives of the people we are meant to protect are not put into danger”.

“We are going to experience robust engagement with critical stakeholders that will usher in the best time for us in terms of developments, quality bills, participation in the house.”

“Proper representation that will usher in inclusive governance ranging from participatory constituency projects in accordance with the earnings and aspirations of my people”.