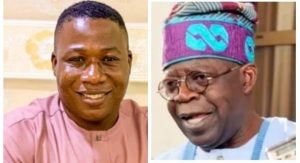 The Akoni of Yorubaland, Sunday ‘Igboho’ Adeyemo, has narrated how he met with the national leader of the All Progressives Congress, Bola Tinubu.

He said a former governor of Oyo State, Rasheed Ladoja, told him that Tinubu requested to see him at his Bourdillon residence in Lagos.

Igboho said he traveled to Lagos and met with Tinubu, who persuaded him not to support the Peoples Democratic Party in the election because the party impeached Ladoja as governor of Oyo State in 2006.

The renowned freedom fighter revealed that Tinubu gave him a sum of N2m to fuel his vehicle back to his base.

Igboho also said he never made his money from thuggery, adding that he is a businessman and he deals in cars.