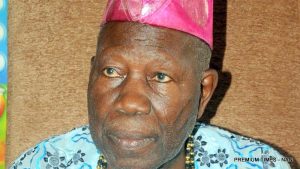 The Olubadan of Ibadanland, Obas Saliu Adetunji, on Saturday, called on farmers and herders in the Ibarapa area of Oyo State to live in unity for the betterment of the state and Nigeria as a whole.

The monarch made this called while speaking at the Royal Festival of Praise organised by the Holy Ghost Royal House of Restoration Church in Ibadan.

It was reported that the theme of the event was “The Gathering of Kings to Praise the King of Kings”.

Olubadan who was represented by Mogaji Okiti-Aresa, Chief Adeshina Olatunji, said blaming an ethnic group for insecurity in the nation would bring about disunity in the country.

He charged Nigerians to join hands with security operates in fighting against crimes in the country.

The Olubadan also called on religious leaders and traditional leaders to complement the government’s efforts in preaching unity in their various domains and constantly pray for peace and unity of the country.

“As leaders, it does not mean we are above God, traditional rulers, religious leaders should know that they are not God and we must lead our people in a Godly manner,” Oba Adetunji said.

Oba Adetunji added that the country needs prayers now more than ever before for peace, growth, and development of the country.

The Alakola of Akola Ijesa, Oba Festus Adeyemi, while speaking at the same event said as traditional rulers, they would continue to do their best in sensitising their people on the need to allow for peace in the country.

Adeyemi called on the youths to be focused and shun acts that would jeopardise the existing unity in the country.

Also commenting, Bishop Donald Oyewande, said the Royal Festival of Praise intends to let the traditional rulers be aware that only God enthroned and needed to be appreciated and praised at all times.

Oyewande said that traditional rulers need to learn and gather to pray for their community and as well educate their followers on the need for peace.

The bishop said that traditional rulers must be the eye and ear of the government in their various domains for the development of their communities.

The General Overseer of Holy Ghost Royal House of Restoration Church, Supreme Archbishop Emmanuel Powerson, called on the traditional rulers to move closer to God and embrace God the more.

“I encourage you to seek God, even in the corner of your bedroom.

“The position you occupy is given to you by God and not by any mankind and I encourage you to unite and assist one another,” Powerson said.

The Bishop further prayed for peace and security of the country.