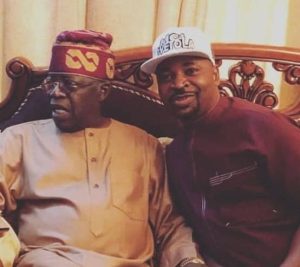 Musiliu Akinsanya aka MC Oluomo, Lagos State Chairman of the National Union of Road Transport Workers (NURTW) has declared that he would always remain loyal to Asiwaju Bola Tinubu irrespective of what others think or feel.

Naija News recalls Tinubu has been embattled over the past few days over his alleged roles in the shooting of peaceful #EndSARS protesters at the Lekki Tollgate by soldiers last week Tuesday.

Some reports even had it that he fled to France after ordering the shooting of innocent protesters. Two of his media investments, TVC and The Nation Newspaper were razed by angry youths in events following the Lekki toll gate incident.

Though Tinubu had openly come out to deny any form of involvement in the shooting of protesters and the protest itself, the jury is still out on his case.

However, MC Oluomo has taken a stand and declared total allegiance to Tinubu by writing: “I will forever stand with Bola Ahmed Tinubu no matter what people say.”

I will forever stand with Bola Ahmed Tinubu no matter what people say.

Meanwhile, it will be recalled that Tinubu himself has declared that he won’t be intimidated by fake news as he remains the Asiwaju of Lagos and the Jagaban.