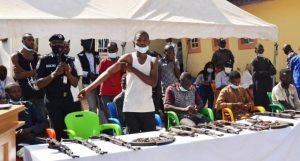 A notorious kidnap kingpin, Mohammed Ahmadu who is said to have been involved in many kidnap operations than he can recall was abducted by another set of kidnappers.

Ahmadu made the confession on Monday, January 11 in Abuja while he was being paraded alongside 17 others by the Frank Mba, Public Relations Officer of the Nigeria Police Force, Naija News reports.

In his confession, the notorious kidnapper told the force that he had to pay the sum of N1.55 million for his freedom from the other kidnapping gang who abducted him while delivering some deadly weapon to them.

Naija News understands that Ahmad is one of the terror kidnappers terrorising commuters on the Abuja-Kaduna and Abuja-Lokoja highways.

He, however, ran out of luck following a recent operation by security operatives in their hideouts.

Ahmadu while explaining his own kidnap told the police that he visited the gang’s hideout to sell ammunition, but was held back in their cave and got a shot in the arm after he hesitated to pay the ransom demanded.

Narrating the arrest of the terrorists, Mba said Abubakar Umaru aka Buba Bargu, 35, was one of the gang leaders that abducted Ahmadu. The police officer explained further that Umaru, who was notorious for always killing his victims, took over the leadership of the crime syndicate after the gang leader and his deputy were neutralised by security operatives.

Mba said Ahmadu had boasted he had charms and could not be shot and Umaru shot him to show how serious he was. The police spokesman said Umaru had strong links with a major terror group in the North.

“Ahmadu is also known as ‘Confirm’ because he was a reputed marksman in the underworld. Yet, he was kidnapped and released after he paid N1.55m,” he said.

He revealed further that Umaru was associated with dreaded Boko Haram terrorist group and that there was a time his own gang kidnapped 20 victims at a time.

“I have saved up to N15m from these nefarious activities. I witnessed an operation where Buba (Umaru) kidnapped 55 persons from a luxurious bus at a time,” Ahmadu stated.

“I broke up with Buji to form my own kidnap gang because of unfairness in sharing ransom money,” he added.