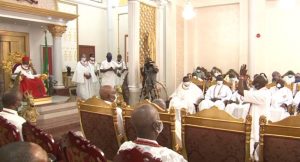 The Oba of Benin, the Ewuare N’Ogidgan II, on Saturday noted that he is not against any governorship candidate ahead of the governorship election in the state, but he is for the people of Edo State.

The monarch stated that the Palace does not meddle into partisan politics and has no special candidate in the September 19 election.

The Oba of Benin stated this on Saturday when he was visited by the All Progressives Congress, Osagie Ize-Iyamu, and other governors elected under the platform of APC.

The party visited the monarch at his Palace in Benin City, Edo State, during the flag-off of the party’s governorship campaign in the state.

Oba Ewuare, while praying for the APC governoship candidate said the Palace of the Oba of Benin does not choose any side when it comes to politics, but can only go with the will of the Edo people.

“I want to stress that no matter what anybody might think, we will remain non-partisan because we are expected as we are perceived by our people, because of the expectations of our people, and because of the laid down rules and guidelines of our ancestors, we must be a father to everybody.”

“We are not expected to lean either way to this or to that, to anybody, because we see every candidate as our children, so we pray for everybody. We can’t lean towards a particular candidate, however, only God and our ancestors, know the mind of man,” Oba Ewuare stated.

He, however, noted that the Palace has not been happy with the recent events in the state and he advised that everyone should pray for a peaceful election in Edo State.

“There is nothing as powerful as prayers. As you go about your campaign, go about it peacefully and without bitterness.”