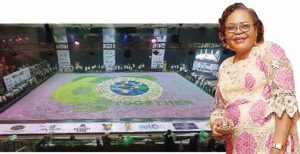 Princess Adedayo Adefulu is the Managing Director and Chief Executive of Graceco Industries Limited, a food production company in Lagos which was part of a recent project that produced the largest anniversary logo in the world. The project, which was championed by the Lagos State Government to commemorate Nigeria’s 60th Independence anniversary, put the country in the Guinness World Records for producing 60,000 cupcakes. Adefulu speaks to ALEXANDER OKERE about the challenges of the project, among other things

What inspired the creation of the Independence Day anniversary logo from 60,000 cupcakes?

The project was actually initiated by Fly Africa in collaboration with the Lagos State Government. So, they approached us to partner with them as the official sponsor of baking ingredients. But when we heard about the plan in its entirety, we proposed that we should involve not just one of our brands, but two. So, Princess Snacks was given the task of producing all the cupcakes while Baker’s Choice produced the baking ingredients. The production of the 60,000 cupcakes was inspired by two major reasons.

One, we were celebrating Nigeria’s 60th Independence anniversary. Also, the previous record was held by Singapore and stood at 30,400 cupcakes. So, we decided that 60,000 was a good figure to go with.

What did you hope to achieve with 60,000 cupcakes?

What we intended to achieve was not only to celebrate Nigeria’s 60th Independence anniversary in grand style but to also do something epic and record-breaking by breaking a world record.

Why did you choose to use cupcakes?

Cupcakes come individually and they are very easy to share. In the past, a huge cake was done and after cutting it, it was very difficult to share. So, this was a new innovation. You would just take your piece of cupcake and eat.

Was that the first time you embarked on something of that scale or do you have a history of handling such a project?

We do that every time. We produce 300,000 cupcakes from our factory every day and we sell them in the large market.

How many people participated in the production of the cupcakes, in terms of human labour?

About 250 people participated and there were a lot of brands, including Baker’s Choice and Princess Snacks. We did the baking at our factory and used our workers. But when the decoration was made, the decorator had other people that participated because decorating 60,000 cupcakes is no joke. They were prepared two or three days before October 1, 2020.

How long did it take to create the logo using the cupcakes?

It took six hours to fix all the cakes to form the logo at the event held at Teslim Balogun Stadium, Surulere, Lagos.

How much did the production of the cupcakes cost you?

It came to us at a great cost but it was something we wanted to do to support the project. Flour Mills of Nigeria donated flour. Dangote Sugar Refinery donated sugar. Different companies contributed materials that we used. It took us two days to bake and package the cakes.

What became of the cupcakes? How were they distributed?

Your feat was reported to have put Nigeria in the Guinness World Records. How does that make you feel?

That gave me fulfillment as what we did was appreciated. It was a very emotional moment when we realised that we had actually broken the record, despite how challenging and difficult the project turned out to be.

Were there representatives from the organisers of the Guinness World Records?

Yes, they were involved. They joined us virtually. They monitored the proceedings to ensure we were complying with the guidelines we were given.

Big projects like that come with challenges. What challenges did you have?

We faced quite a number of challenges. The project took months, if not a year, to complete. But because of the COVID-19 pandemic, many things were stalled. So, by the time the lockdown was gradually lifted, we had a very small window to meet up. So, we had to buckle down and put things together. Raising funds was another challenge that we had. Many companies and individuals had pledged to support the project but because of the impact that the pandemic had on the economy, a lot of people were not able to fulfil their pledges. So, it put the project in a tight situation financially, but we were able to improvise. With the help of the Lagos State Government, we were able to achieve it.

How did you ensure that the cupcakes were prepared in hygienic conditions?

That is what we do every day and we are very particular about the quality of work we do. So, as we were baking and removing them from the oven, we were putting them neatly in a basket in a sanitised area where we normally use for our own production. When it was time to move the products to the location where the decoration would be done, a refrigerated vehicle was used to move them. So, health issues and cleanliness were well-taken care of. At our factory, we have strict quality control procedures that we adhere to on a daily basis. Initially, the plan was to hold the event outdoors at the Teslim Balogun Stadium but because of the rainy reason, we took it indoors and it turned out very well. It was air-conditioned, the perfect condition for the cakes.

Many Nigerians believe the country has big problems that deserve attention, and that creating a huge anniversary logo with 60,000 cupcakes won’t solve their problems. How would you react to that?

Problems are always there; they will always be there but they should not stop us from celebrating milestones. It is part of life that once you have celebrations, like the one we had – a milestone of 60 years of this country’s existence – it should be celebrated. We also chose to produce 60,000 cupcakes because they are representative of Nigeria as a whole. Each cupcake is representative of Nigeria and how we need to come together to make the country great. We can’t do everything literally; sometimes, we have to put a message across in a creative way.

We know that records are set and broken. Do you think yours will go unbroken for a long time?