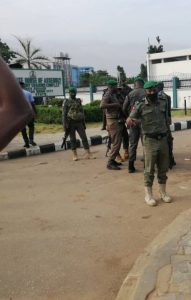 Abubakar Malami, the Minister of Justice, allegedly wrote a letter to the Police and DSS to create a conducive atmosphere for the emergence of a new speaker for the Edo House of Assembly.

Rt. Hon. Victor Edoror, the factional Speaker of the Edo Assembly, made this known on Friday while appearing on Channels TV.

Edoror (APC-Esan Central) asked Governor Godwin Obaseki to challenge his emergence in court if he is dissatisfied.

According to the factional speaker, AGF Malami who is saddled with the responsibility of interpreting Nigeria’s law gave them his backing.

He said: “If you don’t know, the Attorney General of the Federation (AGF) of this country, a man who is saddled with the responsibility of interpreting the laws of this land, wrote a provision on this paper empowering the Inspector General of Police (IGP) and the DG DSS to create a conducive atmosphere for us to sit because section 91, section 90, section 103 and section 109 must be fulfilled. That was why we did what we did”.

Edoror added that the Edo Assembly would not move to sack Obaseki, as they are willing to work with him until his tenure expires on November 12, 2020.

He, however, insisted that Obaseki cannot win the forthcoming governorship election.