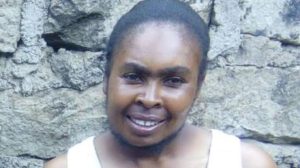 A Kenyan female bus conductor, Theresia Mumbi who has a beard has narrated her story on how she was made to strip in a police cell to confirm that she was female.

According to Mumbi, who spoke with BBC Swahili said police in the state capital, Nairobi,  arrested her and held in a cell with other women.

“Two officers came and told me to take off my clothes. They then examined me. I’m not sure what they saw but they told me to return to my cell,” she said.

She said it happened in July 2018 but it still remains fresh in her memory.

She said she was arrested over identification documents which she eventually presented and was allowed to go.

Since then, she has become an advocate for women with unusual features and now she tells her story to create awareness and encourage others to speak out when harassed.

Ms Mumbi was diagnosed with a hormonal imbalance that resulted in her having a beard. As a young woman, she had to shave her beard often until her skin got irritated by the frequent shaving.

“Some years back I had to suspend shaving at some point because my skin was becoming irritable and the stubborn sores were a problem,” she said.

She explained that her beard grew and that made her run away from people and preferred to shop at night.

She said she was pushed by the situation of the economy in her country which made her become a bus conductor to earn a living.

While at work she meets women with unique conditions and encourages them.

She is part of an association of bearded women in Kenya and during their meetings, she speaks to the younger women.