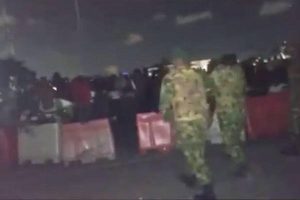 An EndSARS protester, Caleb Ossai, has narrated how he and five other protesters jumped into the river around the Lekki Tollgate in Lagos State when the Nigerian Army deployed soldiers to open fire on them.

An eyewitness of the massacre, Obianuju Udeh, a popular Nigerian disc jockey known as DJ Switch, had said she and other #EndSARS protesters counted 15 corpses at the Lekki toll gate when men in army uniform opened fire on peaceful protesters.

Narrating how he escaped, Caleb Ossai revealed to SaharaReporters that a boat operator came to their rescue and evacuated them to the Ikorodu area on the water.

The EndSARS protester said he was initially declared missing by his family members for close to a week before they traced him to the residence of a Good Samaritan in the Ikorodu area, where he was recuperating from the injuries.

The 27-year-old Ossai said the boat that rescued them almost capsized, according to the man who rescued Ossai, after he became unconscious during the incident.

He said, “Trouble started when the soldiers arrived and started shooting, and some fell with injuries. People started running. Near the Lekki River where I was, some people also tried to escape from the bullets, and they began to push one another until some of us fell into the river. I could not swim, but I wore a white shirt. I was lucky to be visible, and the next time I woke up, I found myself in a house in the Ikorodu area.

“I could not find my phone or did not remember any contact of family members I could call. It took a week for my family members to be able to locate me. Many people jumped into that river. I am not sure everyone made it out alive. The man who hosted me in his house told me that the boat was filled and almost capsized as they journeyed to Ikorodu.”