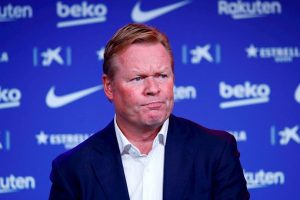 Koeman has asked the Barça leadership to sign the two aforementioned footballers and Barça has got down to work although, a priori, they would not arrive until the summer.

Depay, Olympique de Lyon player, ends his contract on June 30, 2021, and has no intention of renewing. His dream is to sign for Barça and from January 1 he can negotiate with any club.

Lyon wants to sell him in January to get some money and has put him on the market with a price of 5 million euros. Teams like Juventus are interested and could steal the signing of the Barça club if they don’t hurry.

Therefore, Barça will have to choose between signing him in January for five million euros or negotiating with Depay to join the Barça club at the end of this season at zero cost.

The second option is that of the Spanish defender Eric García who ends his contract, like Depay, on June 30, 2021. He would arrive at the Camp Nou for free next summer.

Eric García, The First Signing For 2021

Eric García is not willing to renew his deal at Manchester City, his desire is to return to FC Barcelona this summer. City coach, Pep Guardiola, has tried to convince him to stay, but without success.

If nothing changes, the deal could be closed in the coming weeks to put him under Ronald Koeman when the current season ends.

Last summer, Eric García was on the agenda of FC Barcelona but Manchester City closed in on the band and rejected the offer from the Barça team.