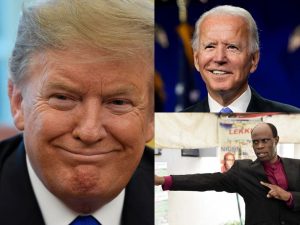 Nigerians have taken to Twitter to mock Taribo West, a former Super Eagles defender turned pastor, who recently declared a prophesy that the United States President, Donald Trump, would defeat Joe Biden by a slim margin.

A video had trended on social media platforms, where pastor Taribo asked his followers to ensure that the prohecy goes viral.

He had boasted that he the earlier declarations he made about the Edo and Ondo state elections, came to pass.

He subsequently prophesied that Trump would defeat Biden by a slim margin and asked his supporters to ensure that his prophecy goes viral.

“Now, I want you to put this out the way I want it. Donald Trump will win the election by a slight split edge over Joe Biden. So, quote me and I want it to be out before time.”

However, Trump lost the election to Biden, although the result is now being challenged in court by Trump.

See some reactions on social media below:

West’s prophecy, however, became a huge subject of debate on social media on Tuesday with many describing him by certain names.

@M4micheal tweeted, “He predicted and made it look like God was speaking through him. If Trump had won, his prediction would’ve been right and he would’ve told his congregation that God did it, but God isn’t an author of confusion.”

@infonaija_247, “No, this cannot be Pastor Taribo West, former Super Eagles of Nigeria no-nonsense defender. This must be Taribo North.”

“The quest for fame and cheap popularity will make men pride in themselves,” tweeted @amablacknaija.

@mykkel3, “One thing I know about this wrong prophecy was that he wanted to glorify himself after the first two corrected ones, that was why he needed a camera to put it on social media…He forgot that he is not God.”