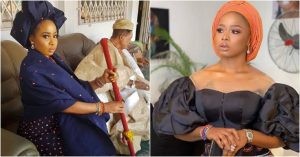 One of the wives of the royal monarch, Alaafin of Oyo, Oba Lamidi Adeyemi has allegedly snubbed him for another rich wealthy man in Lagos.

Naija News learnt that Badirat Adeyemi shared a cryptic post via her Instastory, months after her rumoured split from the first class Yoruba monarch.

Divorce rumour had trailed the couple for months following the accusation that the queen was sent out of the palace over infidelity.

Badirat Adeyemi fondly called Queen Ola shared a cryptic post which centres on “divorce and breakup” on her instastory.

The cryptic post talked about people moving on from where they are not happy, appreciated and valued.

She posted, “Divorce is ok. Breaking up is ok.
Starting over is ok. Moving on is ok.
Saying no is ok. Being alone is ok.
What is not ok is staying somewhere where you aren’t happy, valued or appreciated, that’s not ok.”

However Queen Ola who is set to launch a big spa in the hearts of Ikeja Lagos has dumped Baba.

According to sources, she now lives in her mother’s house in Lagos and she is not ready to return to the palace anytime soon. Sources also reported that friends have already linked her up to some big fish in Lagos.  Queen Ola ready to open her big Ikeja spa, sponsored by her new big fish. 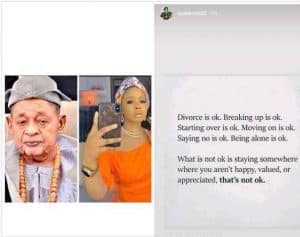