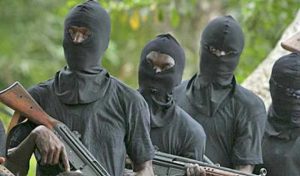 Suleiman Abdulkareem, a security guard at the Bagana Regional High Court, died on Monday while unidentified gunmen hacked him to death on his farm.

A local resident who asked not to be named told our correspondent that the late Suleiman Abdulkareem was a good man who actually had no problems with anyone and lived peacefully in the community.

He said that on the day of the incident, the deceased went to his farm with the intention of clearing his crops, but also met his end when he was attacked by gunmen.

He added that as the news of the tragedy spread in Bagana, the Bijilante and local archers immediately rushed to the scene, where they found the deceased.

He also said that the killing of the court official who was sent to the city to carry out his duties as a civil servant was a clear indication that there were no security forces in Bagana.

He added that two months ago, unidentified gunmen abducted a traditional ruler in a village in Bagana region, he was later killed and his body was found dumped in a field.

Speaking to reporters, the Divisional Police officer DPO (DPO) in Omala Local Government Area, DSP John Ogbebor, confirmed the two incidents, saying he was aware of the incident and immediately dispatched his officers to there, but unfortunately, before they reached it, the perpetrators escaped.