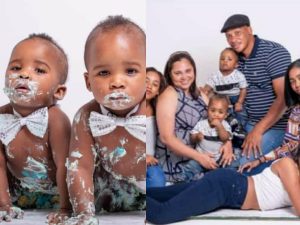 A grandfather in Durban, South Africa, following the death of his grandchildren in a pool has advised parents who have little kids at their care to shun Christmas spending and install CCTV cameras in their homes.

Naija News understands that Mr Ivan Ikes suggested this after his twin grandchildren, Sebastian and Ethan drowned and died in a swimming pool in their home while their parents were away.

It was reported that parents of the deceased children had gone to sympathise with another family who had a loss when the horrible incident happened. Naija News learnt that Sebastian and Ethan were left at home with the nanny, but managed to get to the pool themselves.

According to Ikes, no one would have known what happened to the children if not for the help of the CCTV cameras.  they would have not known how the boys got into the pool.

Reports revealed that the Provincial Police are currently investigating the circumstances surrounding the deaths of young children at their apartment in Kloof Falls, on the KZN upper west highway, Durban.

Naija News understands that the incident happened on Saturday, November 28, 2020.

Speaking on the incident, spokesperson from Rescue Care said: “Rescue Care Paramedics arrived on the scene to find the twins had somehow fallen into the family pool. Paramedics assessed the two and attempted to resuscitate them. However, their attempts were not successful and both boys were declared deceased on the scene.”

On his part while reacting to the demise of his grandchildren, Ikes took to his social media account and wrote: “The boys got up and went outside and somehow after fiddling, got the gate to the pool fence opened. The one kid fell in and the other, after what seemed like beckoning to his brother to come out, jumped in to save him. They hung onto the Kreepy Krawly for as long as they could until eventually succumbing to their fate,”

The distraught grandfather insisted that if it had not been for the CCTV cameras, they would have knowledge of what happened or how the kids got to the pool.

He added, “My people, if you have young kids at home, forget the mad Christmas spending and invest in cameras. They don’t lie.”

Meanwhile, properties worth millions of nairas in Taraba State has been reportedly destroyed after two men fought over a lady, Naija News reports.