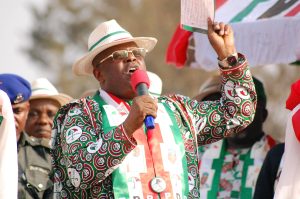 Recall that Umahi had in November 2020 defected from the PDP to the ruling All Progressives Congress (APC).

Speaking on Saturday as a guest of Governor Muhammad Badaru of Jigawa, Umahi accused PDP of playing politics of bitterness and anger.

He said: “As governor, my only boss is my wife and President Muhammadu Buhari is the overall boss of all. If you were brought up well, you will know that you don’t have to insult an elder and your boss,” the governor said.

“The president deserves our respect and support because he means well for all Nigerians and the country.

“When I was in the PDP, all the governors got support from the president to strengthen their states. This is a man that has respect for every governor, a man who never sends anybody against his enemy. He deserves our respect and support.

“Without the support of the president it would have been terrible for governors, he never showed party inclination in helping the states.

“The unity of Nigeria is very important. I urge the leaders of this country to come together and stop bitter politics. Stop bitterness and anger, let us stop sending provocative messages and comments in trying to pull down the ruling party.”