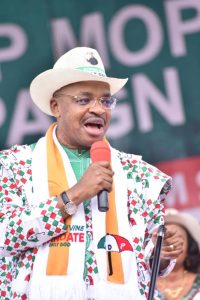 The governor made this known in a statement on Sunday through his Information Commissioner, Ini EmemObong.

Naija News reports that the curfew is from 8 pm to 7 am and takes effect from today Sunday, October 25, 2020.

The Akwa Ibom governor urged residents to report any suspicious movement of items suspected to be looted from the raid on business premises.

The statement read, “Though normalcy has returned to the entire State, especially, Uyo the capital city after the expiration of the curfew which was imposed from Thursday night till Saturday morning, there is a prevailing need to sustain the gains of the curfew, by increased strategic surveillance and holistic law enforcement.

“That the recovery of looted items currently being executed by the Police is the result of the cooperation and collaboration of informants from the communities.

“To this end, the Governor has directed that effective today, daily dusk to dawn (8pm – 7am) curfew be imposed State-wide, till further notice, to help check the movement of the remnants of the undesirable elements who created chaos in our State a few days ago.

“It is also the Governor’s directive, gleaned from the agreement by all youth groups in the State, that all demonstrations and protests be suspended forthwith.

“For emphasis, there will be an absolute cessation of movement of persons except those on essential duty, who must bear proper identification. Any person who is apprehended within the period of the curfew will be arrested and prosecuted.

“Citizens are advised to report any suspicious movement of items suspected to be looted from the raid on business premises, or the assembly of strange or known persons, suspected to be plotting an attack on private or public property, to the security operatives”.