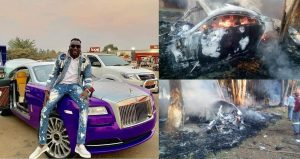 A few days after the death of Zimbabwean affluent man popularly known as Ginimbi, driver of the Honda Fit that collided with his car in the accident that led to his demise has revealed his experience after the incident.

Naija News recalls that 36-year old Ginimbi died alongside three of his friends in an auto crash on Sunday, November 8, 2020.

Speaking on the collision, the Honda car driver said he feels like a ghost anytime he remembers what happened.

According to the man who is currently receiving medical attention from the injuries sustained during the accident, he is still in wonders on how he survived the accident.

He noted that he has been trying to convince himself that he is not a ghost. Giving more details on the accident, he revealed that Ginimbi was trying to overtake two cars when he, unfortunately, collided with his car leading to the ghastly accident.

“I still cannot believe that I am alive, but God is amazing, He saved me. After seeing the damage done to the cars, I am still failing to convince myself that I am not a ghost,” he said.

“I was on my way from Hatcliffe when it (accident) took place and he (Ginimbi) was coming from the city centre direction trying to overtake two cars in front of him, but he failed to do it and by the time he tried to return to his lane, it was too late” he added.

Meanwhile, Ginimbi’s sister, Juliet Kadungure, has disclosed the instructions left behind by her brother on how he wants to be buried, Naija News reports.