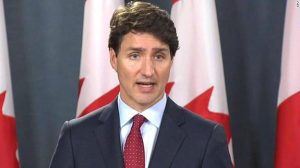 Canadian Prime Minister Justin Trudeau said freedom of expression should be “limited” and should not “insult” a nation.

The AFP news agency said Trudeau made the announcement on Friday but added that they would continue to defend people’s right to freedom of expression.

Recently, French President Emmanuel Macron defended the Charlie Hebdo cartoon of the Prophet Muhammad (PBUH) as a right to freedom of expression, which led to the loss of five lives.

Muslim countries and individuals around the world have condemned Macron’s remarks, which he said: “Islam is in turmoil all over the world”.

However, in an interview with Aljazeera television, Macron said he understood that the cartoons hurt others but that as a leader he “will always defend in my country the freedom to speak, to write, to think, to draw,”.

“We owe it to ourselves to act with respect for others and to seek not to arbitrarily or unnecessarily injure those with whom we are sharing a society and a planet.”
“We do not have the right for example to shout fire in a movie theatre crowded with people, there are always limits,” he argued.

While distancing himself from Emmanuel Macron’s position, Trudeau called for caution in expressing opinions.